Skip to content
We hope you enjoy our articles and the products we recommend! Just so you know, we may earn a small share of sales from the links on this page, at no extra cost to you. Oh, and prices are correct at the time of publishing! Click here for more info.

A car for every purpose and purse – Alfred P. Sloan

While Alfred Sloan’s, the longest-serving head of General Motors and Henry Ford’s greatest rival, dream of designing and manufacturing a car that would satisfy every possible automotive need is still a pipedream, the point at which that car will become available, gets closer every day.

Things have changed drastically since Alfred’s time, and so have the needs of the modern car owner.

In an age of hustle, bustle, and go in which every aspect of life is governed by our need to work and be online, the one thing that most cars, RV’s and vans lack is a source of power to fuel the things we need to make our lives work.

Most new cars are fitted with USB ports and outputs which are fine for charging smartphones but they won’t really run anything larger that needs a little extra juice to function.

If you want to power-up a laptop or charge and run something that needs a little more electricity while you’re in your car or van, the only way you can do it is with a power inverter.

The one-stop solution to the charging and electrical needs of every technology-obsessed driver, power inverters can transform your vehicle into a charging station. And as your life is almost certainly as crazy as ours is, we’re guessing that you’ve been searching for a way to keep your busy life on track.

That’s why we’ve made a list of the best cheap power inverters because convenience doesn’t have to hurt your pocketbook and now, more than ever, every penny matters. 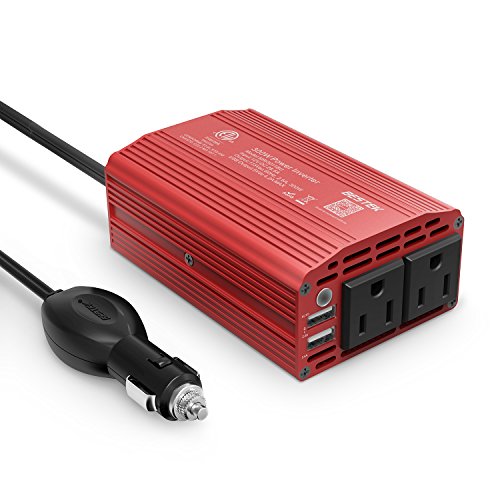 Bestek is proud of the fact that they’re America’s leading power inverter brand, and they earned their position at the top of the inverter mountain the hard way.

They did it by designing and manufacturing the sort of power inverters are made to keep the country running, day in and day out, three hundred and sixty-five days a year.

Built to plug straight into your car’s twelve-volt output, or as most folks still call it the cigarette lighter, this power inverter will supply a constant charge of three hundred watts and when you need it, is capable of delivering seven hundred watts of instantaneous power.

With two USB outlets and a couple of more conventional one hundred and ten-volt plug sockets, it’ll happily run and charge everything from your laptop to a portable coffee maker or any small household appliance that you’ll want to hit the road with.

And thanks to the Safe Charging technology that Bestek has used to bring this power inverter to life, and it’s built-in forty amp fuses, you’ll never have to worry about this power inverter overheating, under and oversupplying whatever it is you’re charging with current, or causing meltdowns and short circuits.

Just plug it in and it, and you will be good to start charging and powering whatever you need it to.

Small enough to fit snugly inside the glove compartment of your car when you’re finished using it, the Bestek also uses a Smart Cooling fan to make sure that it never gets too hot to handle.

And all of the important parts that make it the technological marvel that it is are housed within its durable metal casing, so even if you do drop it, it’ll fire up without hesitation the next time you plug it in. 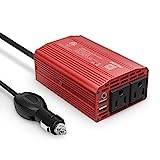 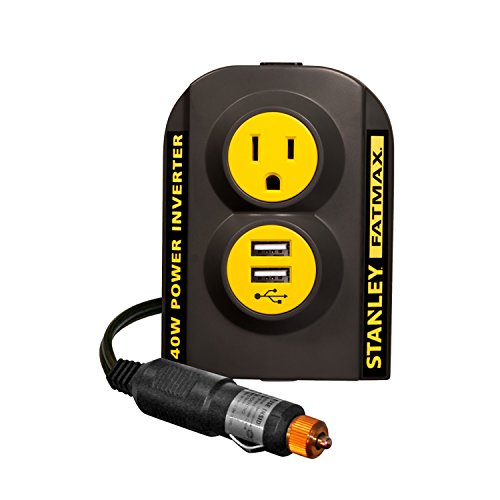 Stanley has been forging tools and finding solutions for all of the everyday problems that America has faced for eighteen decades.

Since eighteen forty-three they’ve been helping working men and women to find answers to all the conundrums that they’ve faced while shaping the world that we live in.

This brings us to their power inverter, which just like every other Stanley product has been designed to be simple and efficient to use.

With two USB outputs and a single one hundred and ten-volt socket, this one hundred and forty-watt power inverter will plug straight into your car’s cigarette lighter, and provide a continuous running charge of one hundred watts.

It’ll charge and run your laptop, tablet, or any other sensitive and smart technology that you need to hit the road with. It may not be the biggest dog in the inverter yard, but it’ll power and drive whatever you need it to without hesitation.

Supplied with a dashboard mounting kit, which it’ll click into with a push and can be easily released from with the touch of a button, the Fatmax adheres rigidly to the Stanley way of doing things.

It’s affordable, simple, and won’t weigh you down with an endlessly complicated and unnecessary set of operating instructions. 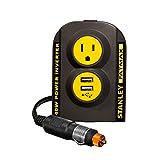 A century of battery and power innovation has pushed Duracell, thanks in no small part to their energy bunny conquering the advertising world, to the forefront of mainstream consciousness.

When people think about batteries, they think about Duracell, so it’s not exactly a surprise that this Ohio based global super brand also makes an incredibly efficient and affordable power inverter.

With two one hundred and ten-volt sockets and two USB outlets, it’ll charge up to four smart devices at once and as soon as it’s plugged in and ready to go, you’ll be able to run your laptop straight from the power that this inverter will supply.

With built-in overload, short circuit and under and overload protection, and silent running fan that’ll prevent it from overheating, Duracell’s inverter is an easy solution to all of your in car power problems.

Don’t let its size fool you into thinking that this inverter doesn’t have it where it matters, it does. It’ll keep on making as much power as your smart technology needs in order to run smoothly and efficiently.

Making power is what Duracell does best, and just like Marvel’s infamous adamantium clawed superhero, they’re very, very good at what they do. 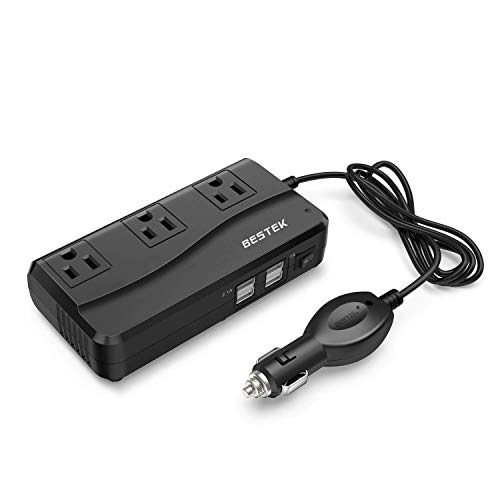 And we’re back with America’s premier power inverter brand for the next choice on our list, which given our more conservative in-car power demands, is our go-to inverter of choice. It’s dependable, reliable and most importantly, it’s also incredibly affordable.

Providing a running charge of two hundred watts, and a peak of five hundred watts when needed, this plug and play power inverter has three one hundred and ten-volt sockets and four USB ports, so can charge a mammoth seven devices at once when it’s plugged into your vehicle’s twelve volt supply.

It’s two and a half foot connecting lead means you can stow it on the back seat of your car when it’s plugged in, and as it has a low battery alarm, it’ll never pull more charge out of your car’s system than it needs to in order to run your equipment.

And if does start to do that, it’s alarm will let you know what’s happening, so you can just switch it off or unplug it.

With built-in fuse and cooling fan protection, it’ll keep itself safe and in perfect charging and running order, and, thanks to Bestek’s patented Safe Charging technology, it’ll also protect your smart technology from under and over-charge and won’t let it fall victim to any other electrical mishaps.

There’s a reason why Bestek is America’s premier power inverter brand, and this handy, easy to use two hundred watt charger is it. 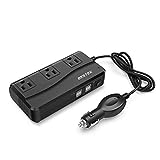 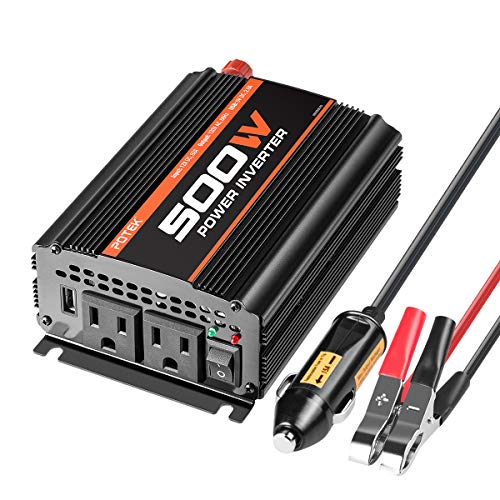 While we’re not familiar with most of the products that high-tech enterprise specialists Potek manufacture, we’ve been fans of their five hundred watt inverter for a while.

There’s more to inverters than the name that’s stamped on their housing, and this tried and tested unit from Potek proves that while you might not have heard of them now, once you’ve used this inverter for a couple of months, you’ll become a lifelong fan of the brand.

With two one hundred and ten-volt sockets and a single USB port, this inverter supplies a running charge of five hundred watts, but when you need a little more juice, it’ll produce a peak output of one thousand watts.

As well as running from your vehicle’s cigarette lighter, it comes with a set of alligator clamps so that when you’re parked up or camping you can hook it up to your car’s battery, so you’ll never have to be without power again.

Featuring overload, overheat, and short protection as standard, Protek’s inverter also has a handy party trick. The thirty amp fuses that it uses to ensure that no harm comes to it or your equipment are fitted externally, so if they do blow, you can just swap them out for new fuses.

Names may not matter, but functionality does, and Protek’s power inverter’s incredible performance tells you everything that you’ll ever need to know about it and the company that makes it.

Built to safely and efficiently provide all the power that you’ll ever need to draw from your vehicle, this underdog inverter is an electrical station that no vehicle can afford to be without. 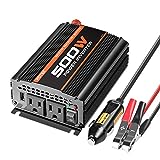 While all of the cheap power inverters on our list fall within a similar price bracket and budget, the main thing that you’ll need a good inverter to do is to supply a safe, stable flow of usable electricity that won’t damage your electrical devices.

It should also be adaptable and versatile and able to charge and power as many devices as possible at any given time.

Easy to use, it’s a straightforward, secure, budget-friendly power inverter that’ll power up to seven separate electrical devices at once.

It may be cheap, but it’s reliable, dependable, and safe. Which is everything a good power inverter should be.

What Is A Power Inverter?

A power inverter, or as they’re more commonly known inverters, are devices that are used to convert DC (direct current) into AC (alternating current) that can then be used to power and charge electrical equipment.

Inverters don’t make or produce electricity, the power that they supply is provided by the DC source that they convert into an AC output.

Power inverters are commonly used in cars, RV’s and trucks and use power that is drawn directly from the vehicle’s DC supply to charge and power electrical devices like laptops and tablets.

Hey my name is Kyle, Founder and Editor-in-Chief of VanAdvice.com. My wife Vesna and I started this site to share everything we’ve learned about building camper vans and van life. Right now we’re in the process of building a 2003 Mercedes Vito.